A life without the Halden reactor

The Halden project was established in 1958 and is managed through three-year programs. The project consists of two parts: a part that does researches on fuel and materials and which has used the Halden reactor as a research tool. The second part is Human factors, which simply refers to how people behave in control rooms during stressful situations. Twice in the program period, the EHPG meetings are held and the meeting in Sandefjord was 41st in the row. One would think that the interest in HRP would fade away with the decision to shut down the Halden reactor, but it was far from anything gloomy that characterized this year’s meeting.

Although there were fewer participants than the previous EHPG meeting in 2017, there were 170 people from 19 countries that held over 100 presentations based on research reports. All the major countries with nuclear reactors, including the USA, China, France, Japan and Russia, were present. At a time of global tension, it was particularly positive that HRP still constitutes an international forum where researchers can collaborate on improving the world’s nuclear safety.

The meeting in Sandefjord was the first EHPG meeting where the participants had to deal with a Halden project without the Halden reactor. The unique Halden reactor and the tests of nuclear fuel and materials have been a main reason for the large international participation in HRP. Therefore, there was a lot of excitement attached to the engagement and participation at this year’s meeting. However, the discussions in the various professional sessions turned out to be as intense and engaging as before. Project Manager of the HRP, Jon Kvalem, who has participated in all EHPG meetings since the beginning of the 1980s, is very pleased with the meetings in Sandefjord.

“It is clear that there is another mood after the shut down of the Halden reactor, but the response we have received throughout this week has given us great faith in the future of the Halden Reactor Project. The world needs continued cooperation on nuclear safety, and with the growing interest in nuclear power, the need for international cooperation will not be any less in the future. China is now re-investing in full and in several countries, among them, The Netherlands and Canada, the nuclear issue is again on the political agenda. We have had a number of meetings with the various participant organizations that have been very positive, so I strongly believe that we will be able to get a continuation of HRP, but then primarily based on Human factors research ”, says an always enthusiastic Kvalem. 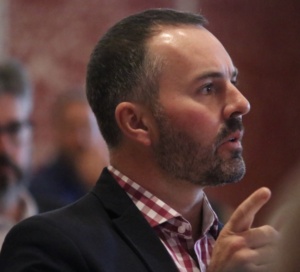 Colin Spencer Brown, representing the Federal Authority for Nuclear Regulation of the United Arab Emirates (FANR) and chairing the Halden Project Technical Committee, confirms Kvalem’s positive attitude:
“It is always valuable for us to attend these meetings and even though the Halden reactor has been shut down. Our interest in participating in the Halden project has not become any less. HRP is able to gather the world’s leading experts on nuclear safety and that means a lot to us to take part in the discussions taking place at the EHPG meetings.

The Halden Project is an OECD-NEA (Nuclear Energy Agency) associated project. Following the Fukushima accident, OECD has placed more and more emphasis on research on Human factors and has established a separate division for this activity. The head of this division in the OECD-NEA, Yeonhee Hah, gave clear support to the Halden project and its importance for international cooperation on nuclear safety in her presentation.
Hah’s colleague in OECD NEA, Pascale Bourassa was very pleased with her stay in Sandefjord; “All the presentations have been very relevant to our work. I am particularly impressed with the width of IFE’s MTO research. We need to learn more from each other, across national borders and disciplines, and we do that here. The level of the presentations has been very high and I am already looking forward to the next conference ”.

The road ahead for the Halden project

Continuation of the Halden project in the period after 2020 is currently being discussed in the Halden project’s leading bodies. The Halden Project Board has its next meeting in Prague on June 19. The most likely outcome of the discussions is that it is decided to split the HRP in two parts, a fuel and material program and a Human factors program. The Human Factors part can continue more or less as before, while there will have to be a further discussion about the form, content and financing of the fuel and material part.

Should the board of the Halden Reactor Project decide to split the Halden project at the meeting in Prague in June, Jon Kvalem and his colleagues at IFE will be busy preparing a new 3-year program. For the Human factor part, a proposal for the 2021-2023 program has already been prepared, with associated financial and legal agreements. The traditional process of continuation is that IFE travels to all member states and negotiates agreements. Since a possible new Halden Reactor Project will start on January 1st, 2021 Mr. Kvalem and his colleagues will soon have to book their airline tickets.