HVRC CREATE is a suite of tools for designing and testing room layouts with version management for tracking design iterations. HVRC CREATE uses interactive 3D technology to enable designers to rapidly prototype and test designs against ergonomic guidelines and recommendations, and further supports an iterative design process with multiple participants, including end-users. Although it is designed for control room engineering, it can also be used for other applications where the layout of an environment is important.

HVRC CREATE is a suite of virtual prototyping tools for interactively designing and evaluating the layout of workspaces from a human-centered perspective.
It was specifically designed to help integrate human factors competence into the design process as early as possible, and to help manage the complexity of the human factors engineering process for control centres for safety-critical industries. The system design and workflow builds on 25 years of experience using virtual reality as a tool for designing and evaluating real control centres. Our software has been used to design and evaluate mission critical control rooms and control centres for many companies around the world in the energy, transport, and process industries. Clients include EDF, Equinor, European Spallation Source, AREVA/Framatome, OKG, Shell, Statoil, Aker Solutions, Statnett, Avinor, BaneNOR, LKAB, Borregård, and many more…

Key features of CREATE include: 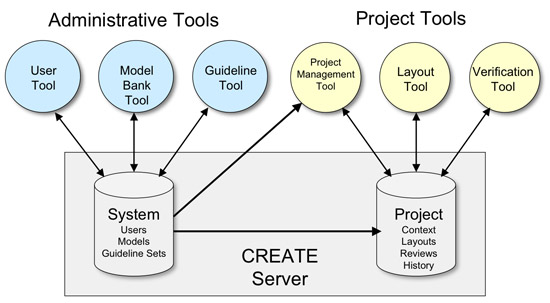 The Project Management Tool enables project managers to organise the project team, and specify which design and review guideline sets should be applied. It is also used to configure which 3D objects, manikins, and pre-modelled rooms or buildings, should be available to project members.

The Layout Tool is used by designers to build room layouts. The designer interactively drags and drops objects from the Model Bank into a virtual control room. The designer can examine the control room prototype as it is being assembled.

Version control facilities are implemented transparently, and functionality is included for the designer to document design decisions. Manikins and measurement tools are available in the Layout Tool for ad-hoc evaluation.

Layouts can be exported in ISO COLLADA or ISO VRML format for use in other 3D tools.

The Verification Tool is used by reviewers to evaluate control room prototypes after a designer has “published” a layout for review. Layouts are tested against review guidelines, using virtual humans and interactive 3D measurement tools. Reviewer comments with illustrative snapshots can be entered and a variety of reports can be generated. If the layout has been tagged with sufficient meta-data in the Layout Tool then some evaluations can be automated so that the Verification Tool can provide a recommendation on layout compliance with specific review guidelines.

The Model Bank Tool is used to manage a hierarchical database of 3D objects that can be used to assemble control room layouts. Objects such as chairs, tables, and computer equipment, can be arranged in categories. Models of rooms or buildings produced using other tools can be included, and manikins are also stored in the Model Bank. In addition to the models themselves, the Model Bank contains information about the objects in it, such as name and manufacturer. It also includes a version control facility.

HVRC CREATE also includes a User Tool, for managing access to a server and for assigning administration rights, and a Guideline Tool for installing guideline sets. Note that a “guideline set” can represent a set of requirements and not necessarily a set of human factors guidelines. An immersive VR viewer is also available for rapidly viewing of layouts using head-mounted displays.

14 May 2018: Released Version 4.0.7
Version 4.0.7 is now available to registered users. This version adds a layout information dialog to the Window menu of the Layout Tool, and 3D geometry import support for OBJ, LWO, PLY and SCENE 3D formats is enabled by default for new installations.

5 July 2017: Released Version 4.0.6
Version 4.0.6 is now (7 July 2017) available to registered users. This release includes a new “Floor Plan” parametric object. While similar to the Image Surface, it is intended to function as a tool rather than be part of a layout design. it offers special functionality that makes using images of 2D drawings as templates relatively easy to scale correctly and use. The Model Bank Updater fixes a couple of bugs for snap/locations on a couple of the computer display models. This release also includes a number of performance optimisations targeting layouts that contain large numbers of high-resolution image surfaces such as control rooms with fifty or more HD-resolution displays. See the release notes for additional details.

31 March 2017: Released Version 4.0.5
Version 4.0.5 is now (7 April 2017) available to registered users. This release includes a new “Monitor Stand” parametric object. Displays in the Model Bank that do not have stands incorporated into the model can be attached to this object, for example. The Model Bank Updater includes new bathrooms objects and improved desk accessories. The installers for Windows and the first-run process has also been enhanced in this release, and a number of minor issues have been fixed and refinements made, both to the software and the user documentation. The Model Bank Tool user guide in particular has been revised to reflect that it can now import data from multiple 3D geometry formats and the modelling guidance and examples have been largely rewritten.

4 July 2016: Released Version 4.0.4
Version 4.0.4 is now (August 2016) available to registered users with current support. The installers for Windows have been completely rewritten with the aim of making installation a smoother process for Windows users. A significant new feature in this update is that 3D models can now be imported directly into a layout in the Layout Tool by dragging a file from the filesystem into the layout. These are stored as “Project Models” rather than in the shared Model Bank. New computer models have been added to the default Model Bank (for existing server installations, download the model bank updater package and install using the Model Bank Tool to get these). Other improvements include the removal of line-edges when removing models created using SketchUp and several usability optimisations and bug fixes. See the release notes for additional details.

4 March 2016: Released Version 4.0.3
Version 4.0.3 has been released and is available to registered users with current support. This release brings the standalone CREATE Viewer tool to HVRC CREATE 4. A new QuickReference3D sheet has been added to the user documentation, listing all 3D View keyboard shortcuts. An option to turn off project-level model filtering (and thus always show everything in the Model Bank) in the Layout Tool has been added (for single-user standalone servers only). A small number of bugs have been fixed. See the release notes for additional details.

12 February 2016: Released Version 4.0.2
Version 4.0.2 has been released and is available to registered users with current support. This is primarily a maintenance update. New features include multiple options for quickly updating Model Bank models used in a layout to the latest revision, and additional options when exporting COLLADA data from the Layout Tool. New 3D models for light switches, outlets, and shelves have been added to the standard Model Bank database. See the release notes for additional details.

11 December 2015: Released Version 4.0.1
This is a minor update to the HVRC CREATE 4 system. See the release notes for additional details. New features includes option to enable additional 3D loaders for importing 3D geometry in LWO, OBJ, PLY, and SCENE (Ogre3D) formats. More models, including a new set of doors has been added to the default Model Bank model collection.

5 November 2015: Released Version 4.0
Version 4.0 has been released and is available to registered users with current support agreements. This is a major update to the HVRC CREATE system that requires 64-bit Windows 7 or newer, or OSX version 10.10 or newer. See the release notes for additional details. We are in the process of revising the information on the IFE website to reflect the new functionality in CREATE 4.

HVRC CREATE has been designed to support collaborative design projects.

HVRC CREATE has been designed to be so easy to use that end-user and human factors experts can actively participate in the design process without prior experience in 3D modelling.

IFE can assist with the following:

Rates are negotiable depending on the scope of the work.
Customers should contact CREATE Support for a quote or further information.

The minimum requirements for running the HVRC CREATE Tools are:

The software can be used on less powerful hardware configurations and with two-button mice, but this is not recommended for serious work.

Windows XP is no longer supported by Microsoft or us, but CREATE probably still runs on 64-bit Windows XP. CREATE 4 Tools can be be produced on request for some desktop versions of 64-bit Linux.

The CREATE Server is based on web server technology. Windows (including 2003 & 2008), Linux and Mac OS X operating systems are supported as server platforms. Currently installers are made available for Windows 7/8/10 and Mac OS X 10.10 and 10.11. Installing the server on a laptop is only recommended for single-user CREATE Server licenses. Contact CREATE Support (see below) for more information.

Machines that will host the server for multiple users and will not be used as workstations do not need graphics acceleration but should have at least 1GB of free storage space. The server can be hosted on a virtual machine. The server data should be regularly backed up.

Time-limited licenses with technical support are available to licensees that only require a license for a specific project. Please contact CREATE Support indicating the number of users and duration required for an offer for a time-limited license.

CREATE is normally licensed within the context of a design project where IFE is participating in the design process. We strongly recommend purchasing a training course if you are interested in purchasing a license to use on your own in a project.

At present we can only accept corporate purchase orders, with payment by bank transfer to the Institute’s bank account, details about which we provide you when we bill you.

If you fax or e-mail a request to license software from us, we will respond by sending you an official offer.

When you e-mail or fax us a purchase order, you will be given permission to download the software and will be issued with a temporary server license. This enables you to ensure that the software works as expected on your computer network before completing payment. When payment has been received, a permanent license is issued. A DVD-ROM and printed documentation can be sent to new customers on request.

Requests for an offer and purchase orders can be e-mailed to create-support@hrp.no or transferred by fax to +47 69 21 24 90.

Substantial discounts are available to universities, colleges, and schools wishing to use our software for teaching purposes and non-commercial academic projects. Please contact us for details.

About the Demonstration Version

If your computer meets the necessary system requirements for the HVRC CREATE Tools, then you can install a demonstration version of the Layout Tool on your system and use it to access our public HVRC CREATE server.

On your first run, a wizard will appear that enables you to select the demo server. The address can also be entered into the user preferences dialog.

Use the following server: http://create.ife.no/

The following are PDF files that can be read using a PDF viewer such as Adobe Acrobat Reader:

The Read Me file that is installed by the demo installer contains additional information about this software.

Answers to the most commonly asked questions can be found in the HVRC CREATE FAQ. The Halden HTO Project recently arranged a meeting in the technical steering committee, Halden HTO Programme Review Group (HPRG). 35 representatives from all the…